Close
Receive news for print editions, artwork releases, exhibitions and talks.
Thank you for subscribing
Oops! Something went wrong while submitting the form.
Close
Questions about prints, original artworks, collaborations, or do you know where El Dorado is?

Thank you. I will get back to you shortly.
Oops! Something went wrong while submitting the form.

Wandering to the next page

In the studio, listening to: 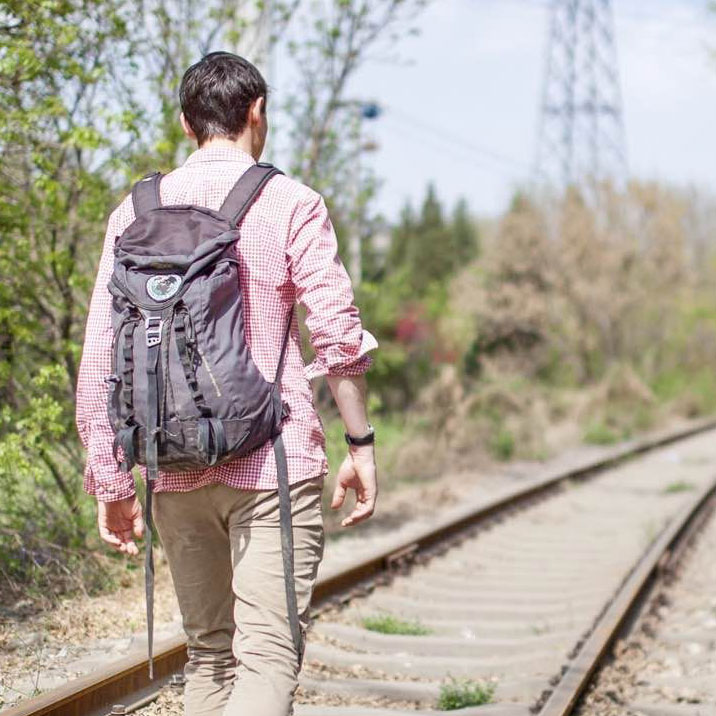 “What makes a place?

My exploration is in pursuit of authenticity – a compulsion to walk unremittingly, looking beneath the surface of cities and landscapes to discover the distinct systems and stories they hold. The tragedy, romance, folklore, and facts wrought by great metropolises become landmarks within my visual storytelling. I also seek out the secrets of the wilderness, the dead space of places, and the aural maps of people’s lived experience – I'm forever fascinated with our emotional connection to place.

My practice fuses personal geography and physical exploration with culture, history, climate, politics, philosophy and economics and is framed by the omnipotence of technology, migration, and the man-made borders around environments. Humour and satire often colour the narration to these new stories of place, bringing personal perspective to a process of describing the world and its people as they exist today. 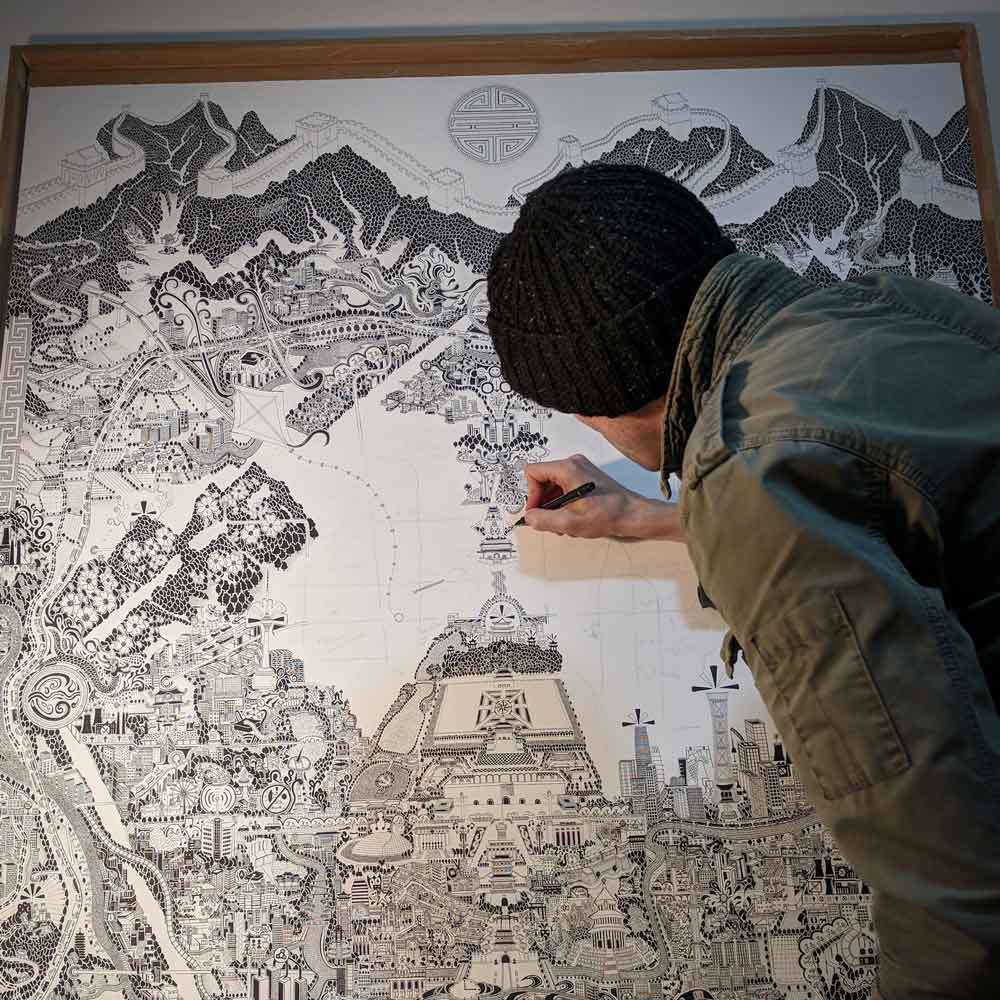 Gareth Fuller (1980) was born in Carmarthen, Wales, and is of British and Irish heritage. He is self-taught as a visual artist, with a career that has taken circuitous paths through journalistic and exploratory contexts, beginning with an early working life as an apprentice in broadsheet newspapers. Inspired by the magnitude of the newsroom, he moved through roles in production, graphic design, and, eventually, adventure travel and documentary film production. This combined professional rearing remains a foundational, if subconscious, thread in his artistic career, his work composed through the lens of an outsider-observer – a storyteller cognisant of the multiplicity of truth.

Fuller’s art manifests as illustrative transcripts of place. Through a double-phased process of pedestrian discovery and meticulous hand-drawing, he builds topographies and cultures as mapped visions of all that is real and imagined within specific places. He weaves his compositions through first-hand urban and rural exploration – walking at times for several miles at a stretch – partnered with extensive research, and a deep excavation into local knowledge and lived experience.

Fuller is best known for his series Purposeful Wanderings, which constitute a decades-long journey – both physical and creative – into documenting his understanding of the world through art. His pieces give particular focus to the emotional connection between people and place, and the inherent phenomenology that exists around being embedded in the world. Works in this series include London Town (2005-2015); Bristol (2014); Beijing (2018); Tourist Map of Pyongyang (2019) and Shanghai (2022). Fuller’s prints have been acquired for the permanent collections of The British Library, the Museum of London, and Bristol Museum & Art Gallery.

Fuller has exhibited at Art Beijing, the Royal College of Art, and the Royal Institute of British Architects. Beijing is currently on display at the British Ambassador’s Residence, China. A renderer and pedestrian without portfolio, Fuller has lived and worked in the UK, Ireland and China. He is currently planning new journeys in the United States and South America.

The content within Fuller’s work is gathered through unbridled exploration of his surroundings. His process brings new informality to the methodological tradition of the dérive, building psychogeographical cartographies that resonate through humour and humanity.

JOURNEYING INTO THE ART OF PLACE. UNRAVELLING STORIES. BECOMING LOST IN DISCOVERY. 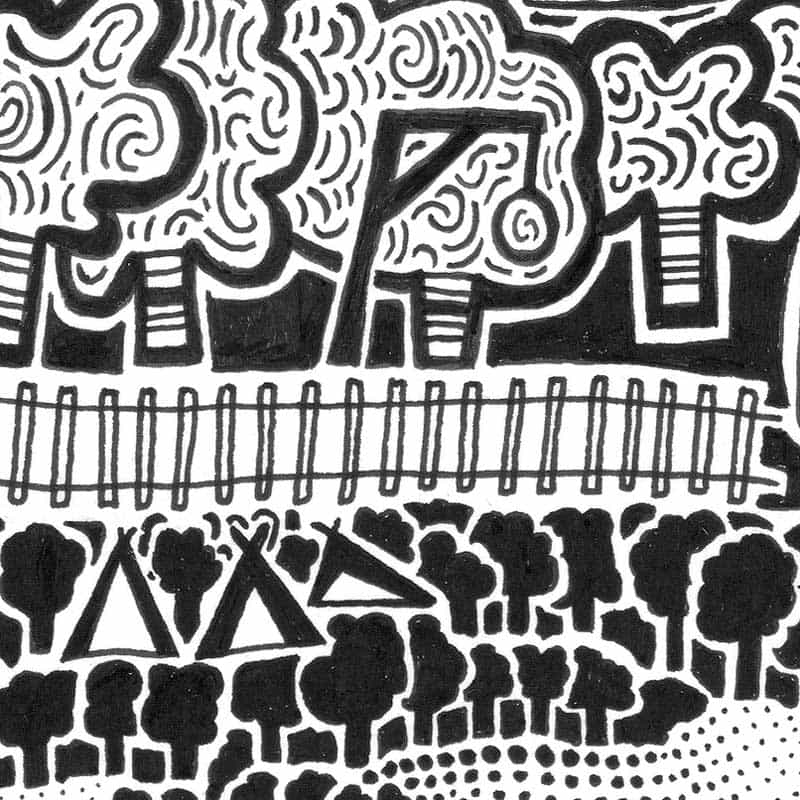 There are many legends surrounding the village of Harman’s Cross and its name. One tells of a man named Harman – a murderer hung at the crossroads. Why a village would be named after a murderer’s execution remains a mystery. 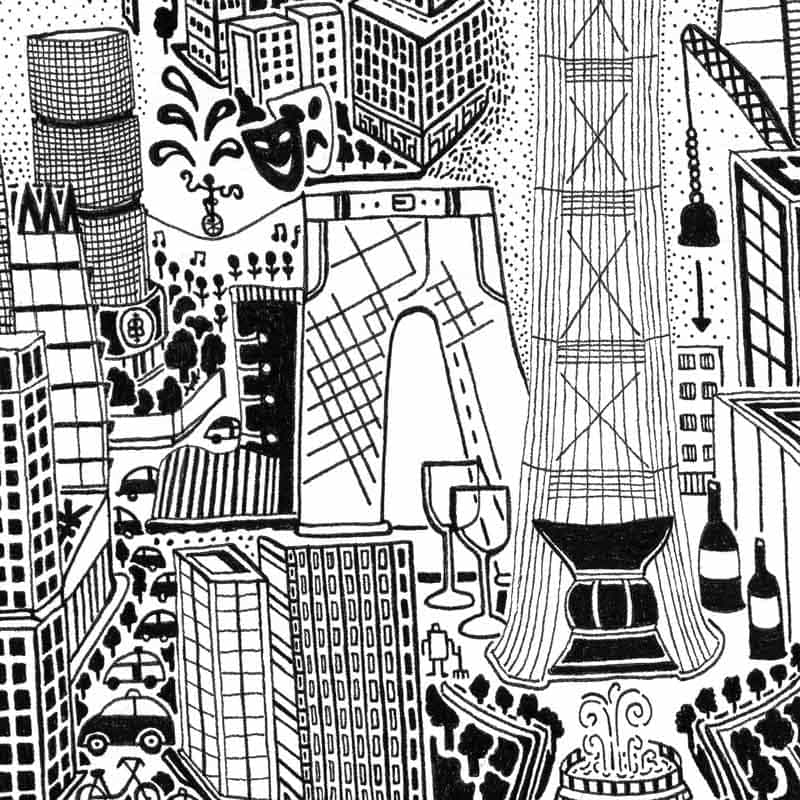 This detail shows the headquarters of Chinese Central Television, a building that resembles a pair of trousers. To the right, it includes Citic Tower, known locally as China Zun - Zun meaning a type of ceremonial Chinese wine chalice, thus the image of the wine bottle, with glasses at its base. 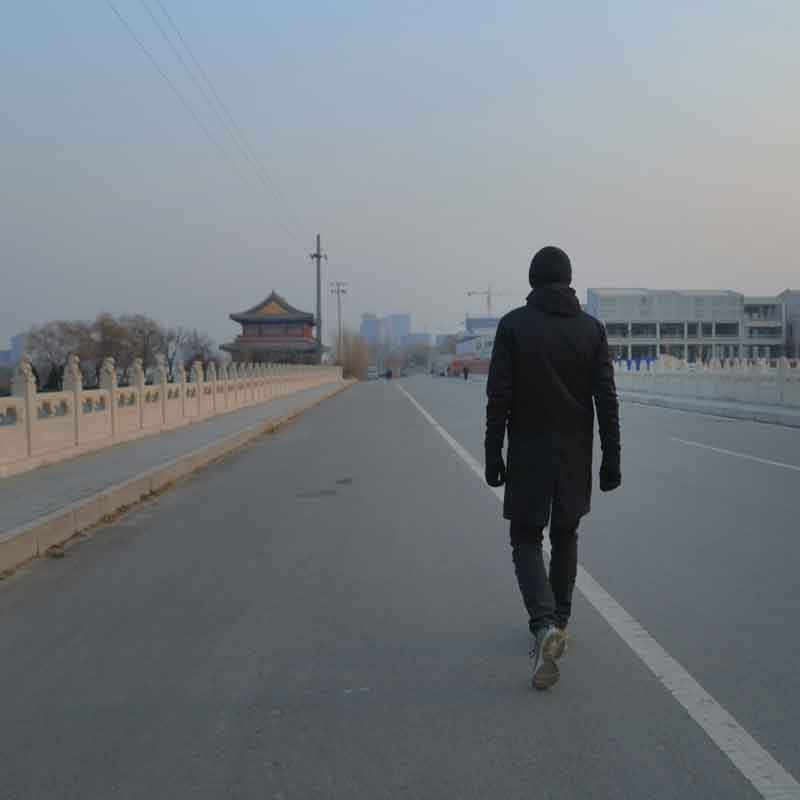 Fuller’s practice is built on a relationship between two major phases – an exploration and a documentation phase. The rhythm between the two is dictated by context and geographical circumstance. At times, Fuller’s exploratory jaunts will unfold over consecutive weeks, exploring places intensively as a singular capsule experience. At others it will take place incrementally, occurring as interspersed wanderings punctuated by periods of drawing. Regardless of the cadence of specific projects’ processes, Fuller’s creations are consistently dense with detail, built using a layering of patterns, systems, technologies, iconography, architecture, human stories, facts, memories, fictions and humour.

As he traverses the geographies he chooses to explore, he maps events and experiences as ardently as he does geographical and socio-cultural terrain. His practice, therefore, holds kinship with both factual reportage and literary storytelling, creating a visual archive of collective knowledge that is built from both wisdoms and anecdotes, thread together equally by infallible truths and playfully subjective readings. His aim is authenticity of both place and time – his artistic sensibilities aligning variantly with the immediacy of street art, the accessibility of graphic design, and the frankness of performance art.

In his conversations with people he encounters while exploring, he teases out tales and stories of lives held together by places. It’s in these moments that dialogue begins, with the conversation being extended into the topography of his drawings.

Fuller’s final works become palimpsests of both empirical and second-hand evidence, entering a third phase only once they have been completed. At this point, they defer their content to their audiences, becoming living maps as they are added to within the interpretations and mental wanderings of those who behold them. 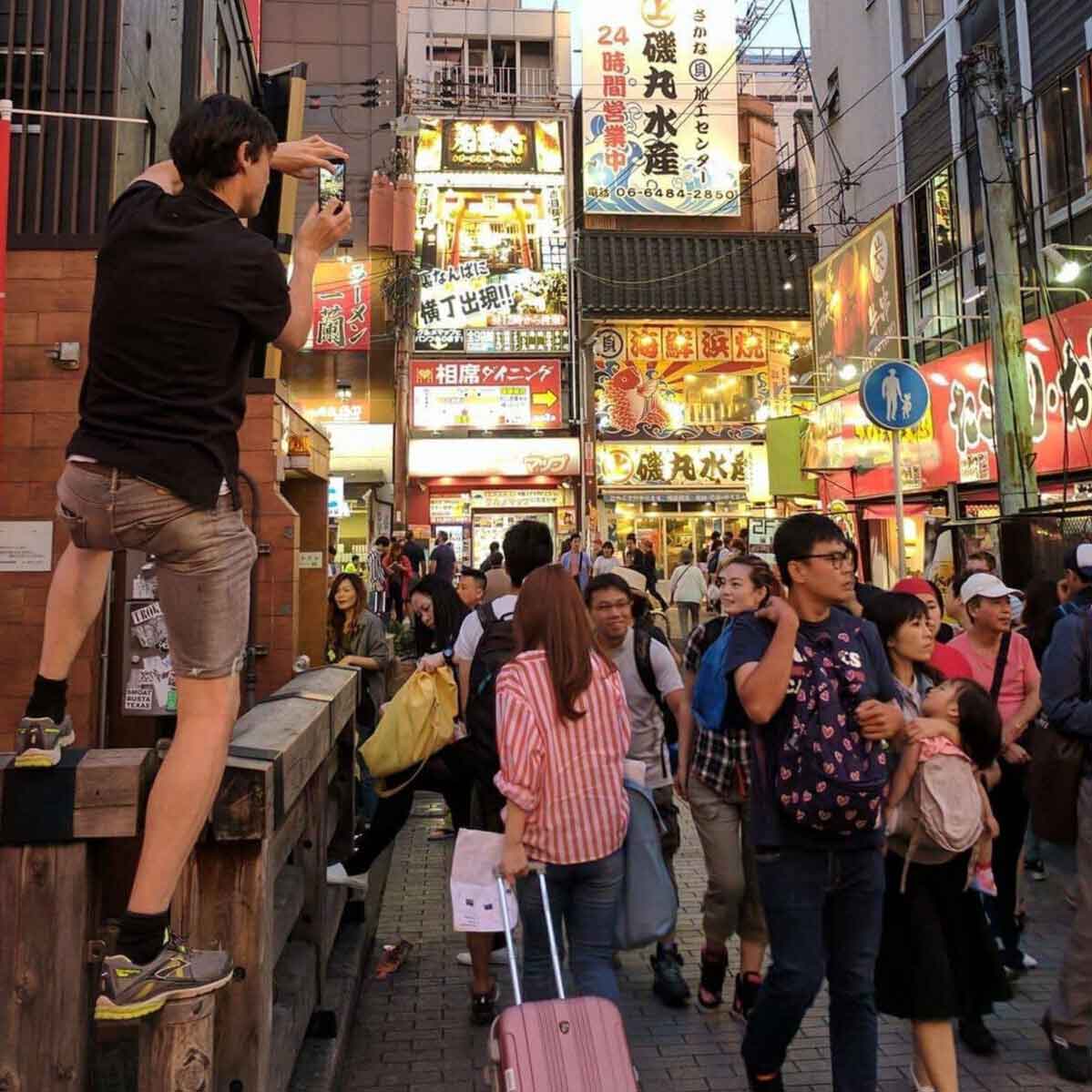 The Quarantine + Pandemic Survival Map: 'It's escapism, with a lot of humour'
The Guardian
Maps of quarantine the work of a topographic artist in isolation
Elle Decor
What happens when a map artist goes into quarantine
CNN - Style
Pyongyang panorama pulls back curtain on city of mystery
The Guardian
Artist Gareth Fuller spent a year walking the streets of Beijing
National Geographic
Read all press

All Over the Map: A Cartographic Odyssey
‍National Geographic, Betsy Mason & Greg Miller

British Chambers of Commerce in China 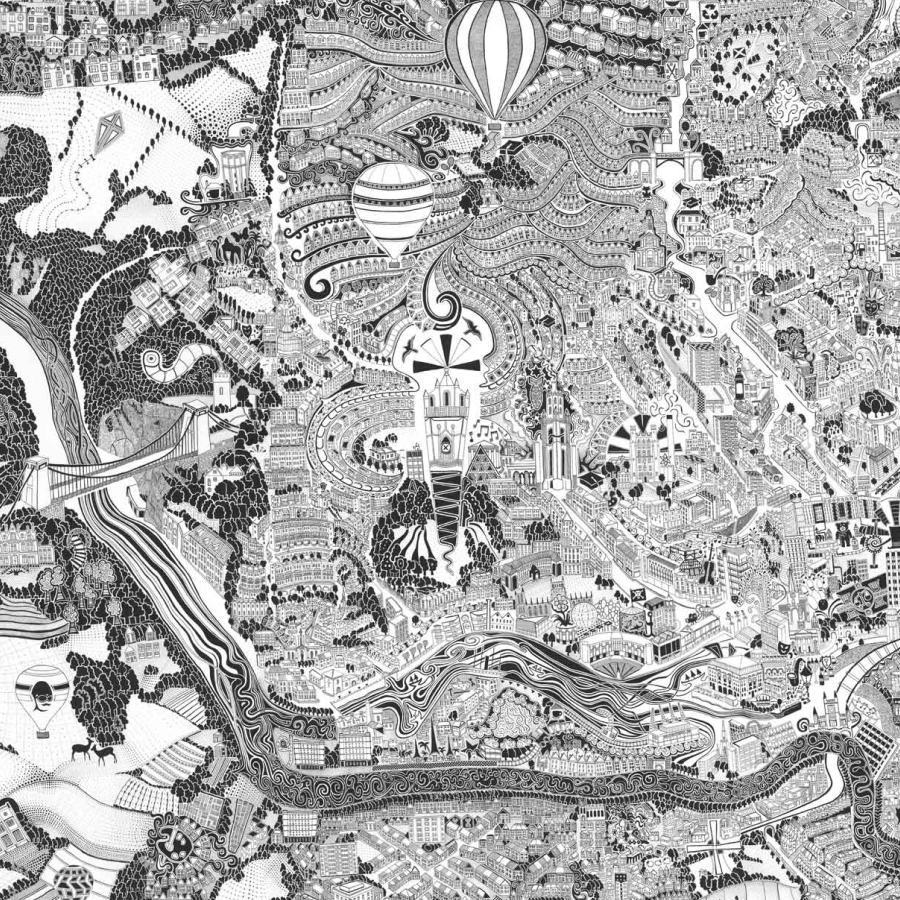